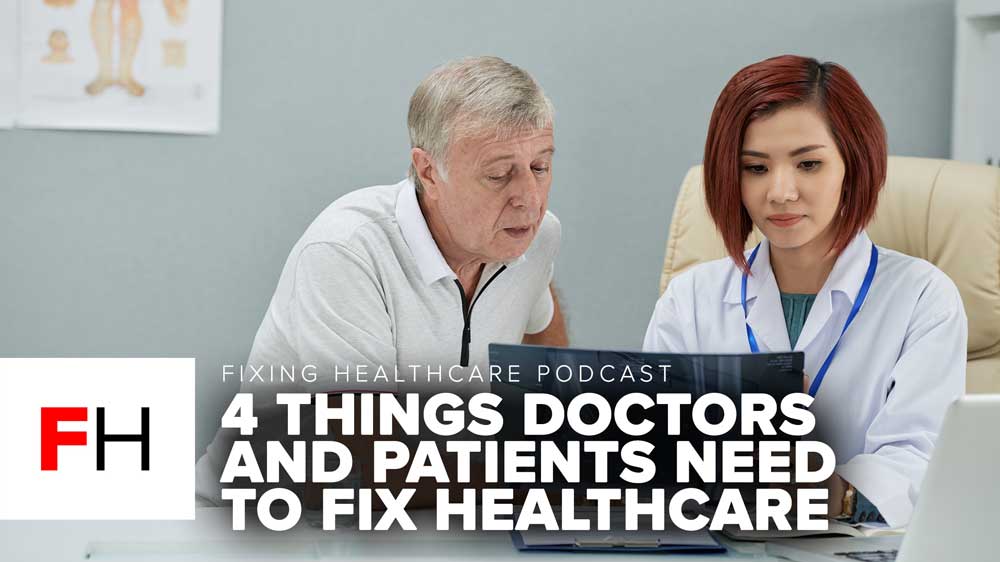 You know, what I’d like to share with you today is four things that doctors and patients need if we’re going to fix healthcare. Now, this is a five part series. There’s this introduction to what we’re going to talk about. And then I’m gonna go into these four areas in some detail. Now these four things are absolutely going to be critical if we want to fix healthcare. And really the best way to look at it is that the genesis the real core of what we need to do to fix healthcare, is to reestablish the competency of the amazing relationships that doctors have with their patients. Not just friendly relationships, but thoughtful relationships where doctors can understand their patients, not as a diagnostic node, but from the perspective of ethnography.

Understanding them at the core of who they are, how they live, what are the psychological and mental health issues? What is their economic situation? What are the other cause factors that impact their ability to comply with wellness and health, and to really do a better job of managing their diseases in the case of disease management. We really have to realize that there is four things that have to happen to reestablish the relationship between the doctor and the patient. Now, this is going to sound shocking, and some people may already know this, but to me it’s really shocking is that as a management consultant that works across the entire healthcare ecosystem, I can tell you that there is a new body of work right now that is called patient throughput or patient flow. Now, believe it or not, these methodologies are actually using the systems that they use in restaurants drive through restaurants, you know, In and Out Burger, McDonald’s, name your restaurant to get customers through quickly. So we’re actually McDonaldizing, literally, the way in which we get patients through a clinic.

So the goal with these new systems is give the patient and the doctor the least amount of time so that we can see the most amount of patients. Now at some level, you would say, wow, that’s great. We want to see lots of patients. But what it does is it creates the prescription default mechanism. You come in you got a chronic disease, the chronic disease could be solved your weight loss and through lifestyle, management but you don’t have time to have that discussion. So you write a prescription. That is happening as we speak in 10s of thousands of clinics around the country. That’s unfortunate. So in this series, I’m going to talk about the need to reestablish time. The old fashioned commodity of time is critical to reestablishing the relationship between the doctor and the patient. Now, here’s the other problem, and it’s really, really big. And again, in this five part series, I’ll go into it in much more detail.

Doctors need more data. You know, oftentimes, a patient will come into a clinic and they’ll look in their ear with an otoscope. They’ll listen to their chest for obvious acoustic reads on hearts and respiratory functions. They’ll get a blood pressure and they’ll get body temperature. That’s not a lot of information. And we already know that things like blood pressure is impacted by what we call the white coat syndrome where patients are nervous, their blood pressure goes up. So is it a psychological impact onto their blood pressure or is it a physiological impact? So one of the biggest problems that patients and doctors have is that during that relationship during that dialogue, there’s not nearly enough data. We’re going to talk in this series about how we fix that. The other issue is resources. Now resources really have two components to them. One part of the resources is tools. The other part of the resource is training. So from a tools perspective, doctors need easy to explain and deploy resources primarily in the areas of mental health, weight loss, stress, stress management, they have very few tools. But you know, in a time of hyper connectivity and digital ubiquity, there are all kinds of amazing tools that we can give doctors that instead of prescribing a stantin drug or prescribing a blood pressure medication, they could be prescribed a wellness routine, which is so much more humane, because we’re helping them focus on preventing disease rather than treating disease. Now, I know this concept isn’t exactly new. But the reason it doesn’t happen is a doctor doesn’t have the time. They don’t have the data. And they also don’t have the tool resources. Now, there is another component to the resource question. And that is training. You know, I have the great honor of working at one of the country’s largest medical schools as their chief innovation officer and as an adjunct professor. And what we are doing now is that we’re really training the physician of the future. We realize that there will be a tremendous emphasis on total population health, on personal health on wellness, prevention, anticipatory and even predictive analytics in the area of healthcare. So we’ve got to give our caregivers better training on wellness and nutrition and how to use these incredible resources. So resources is the third thing that needs happen. Now the last but certainly not least, is that we have created a modern medicine machine that rewards everybody. It rewards everybody to treat patients. And that is got to change if we don’t incentivize the entire healthcare ecosystem to be financially rewarded for prevention and wellness, rather than gratuitous intervention, guess what? We’re going to continue to default in the scaling, which is absolutely out of control of treatment or hyper interventional, approaches towards care. We can’t keep treating, treating, treating because the problem is, it’s not scalable. We’ve increased the cost of healthcare by five times and over the last 80 years, and we’ve never had a sicker population of patients. It’s not working, it’s broken. Now, before I go into the next video, I want to say something that’s very, very… I want to make this really clear because of the important message of, of my entire documentary.

Healthcare is broken. And the more that you’re in healthcare, the more you realize just how bad it is. So point number one, healthcare is broken. But here’s the good news. Healthcare is fixable. Healthcare is fixable. Is it easy? No. Is it going to change? Do we have to change lots of things? Yes, is the negligence contributory meaning the patients add to blame and the healthcare ecosystem is to blame. Of course, we have patients that are eating their and drinking their way and smoking their way into chronic disease. 70% of healthcare costs are associated with self inflicted chronic disease. This is contributory negligence. The good news is it is fixable. The last point that I want to make and the whole idea of this film is to create a movement That movement is about the fact that we have to fix it. Healthcare is broken, it’s fixable, but we have to fix it. And I really hope that fixing healthcare is the the genesis for a much bigger conversation about how do we provide health care to underserved communities. We talked so much about providing access to everybody access, access, access, we demand more medicine, we demand more treatments. I think that’s inhumane. We have these underserved communities that live in food deserts, where they don’t have access to prevention and wellness. And then we’re saying that Yeah, let’s get a more treatment. That’s inhumane because if you go to a more affluent neighborhood, they’re going to concierge health. They have access to coaches and gyms and all kinds of things including healthy gourmet natural food. The real equilibrium that we need to create here the real fairness we need to create isn’t about making treatment accessible to everybody. Although we do. We ultimately have to change the conversation to making health, not sickness treatment available to everyone. Alright, we’re going to move into now my four key topics of what has to happen in order to change the discussion and the intervention at the caregiver level. Now later in my videos, we’ll be talking about the economy. We’ll be talking about reimbursement, we’ll be talking about concepts like population health, and all of the granular stuff. But the idea of this is to talk about this core the relationship between the doctor and the caregiver. So I hope you join me for the next four videos as I dive deeper into the four things that have to happen in order to fix healthcare.